I started this 7 Causes in 7 Days blog series last week to mark 7 months of FREEDOM for Josh, Shane, Sarah and all of us who fought so hard for their freedom. The number 7 is significant in many cultures around the world, often considered lucky. My birthday falls on November 7 and I was always told that being born on the 7th day of a month was considered very lucky in my community. So passing the 7 month of FREEDOM feels like an especially significant marker. It feels additionally significant because this past weekend, I attended the wedding for Sarah and Shane, with Josh as their best man…

The crashing waves of emotion were certainly present within me. Unbelievable joy celebrating their FREEDOM to finally realize the vision they desired in January 2010, when it seemed like an impossible dream, crashing against deep pain over the absence of people who were central to the fight for their FREEDOM and their final release. I felt additional pain over the inability of others facing grave injustices to engage in similar celebrations of reunion and union.

I thought of Hamid Ghassemi-Shall , a Canadian citizen wrongfully imprisoned in Iran for four years this month, and his wife Antonella Mega, who are unable to see each other let alone celebrate together…Read more. 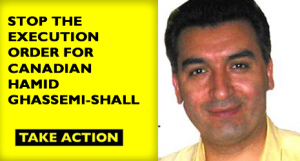 2. Watch and share this VIDEO of Hamid’s wife Antonella pleading for your support in the campaign to FREE him.

3. Write a letter to Hamid to keep his hope alive.

PREORDER A Sliver of Light: Three Americans Imprisoned in Iran