Josh looks at one of the first copies of ‘A Sliver of Light’ in awe.

“These words will be windows, not walls!” Josh pronounced as he started writing A Sliver of Light with Shane and Sarah.

Spending every day for more than two years engaging the world in their plight,
I was acutely aware of the physical and political walls that prevented them from sharing their words with the world. I felt them every time I posted on Facebook and Twitter, every time I sent a message, every time I told someone about them, every time I asked for help to free them. Without being able to communicate with them at all, I felt grossly inadequate at guessing what words they would want to share with the world. I found words grossly inadequate at capturing our collective horror. But I had to give every bit of energy I had to trying my best. The stakes were high. The stakes were their lives. Their freedom. Our lives. Our freedom.

I hold their words in my hand.

Even now, after more than 2 years of freedom, I find their freedom to communicate overwhelming. And powerful beyond words. Their book is a manifestation of that power. In words. Every word I read, I feel everyone who fought for their freedom alongside me, with me. Free the Hikers core campaign team members who were with me every day, in person, via phone, Skype, gchat, email, Facebook, Twitter, YouTube. Organizing, creating, collaborating, sharing, engaging, supporting. I remember those of you who followed their story so closely you asked me for updates if there was a gap of less than an hour in our social media posting. I will never forget.

Now you can all finally read their story in their own words. Better yet, you can attend one of their author events, and hear their stories in their own voices. We will be posting news about the events and media coverage on the Free the Hikers Facebook and Twitter accounts. Join us there! And we would love to see and hear your responses. Tag them #SliverofLight on Facebook, Twitter, G+, tumblr, Instagram, etc.

NOTE: A Sliver of Light: Three Americans Imprisoned in Iran will be released on March 18, 2014. Preorder it here: 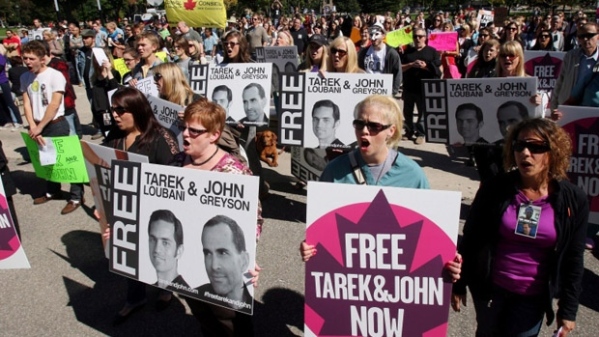 “The time is always right to do what is right.” ~ Martin Luther King, Jr.

This time of year has become Freedom Season for me. On September 21, 2011, my precious friends Josh Fattal and Shane Bauer, were freed after being held hostage by the Iranian regime for 2 years and 2 months. On September 14, 2010, my other friend Sarah Shourd, was freed after 410 days in solitary confinement in the same Iranian prison. I will never forget those days. Along with all their loved ones, I could not be free until they were free.

When Sarah was freed, the sky grew larger, and I imagined how immense it would grow, when Shane and Josh joined us in the free world. Now that Josh and Shane are free, I am able to feel the growth of the world around me, with news of every political prisoner freed. On September 14, 2012, Jason Puracal, the brother of my friend Janis, was freed from Nicaragua, on September 18, 2013, Nasrin Sotoudeh, human rights defender extraordinaire, was freed from Evin Prison, Iran, and on September 23, 2013, Hamid-Ghassemi Shall, husband of my friend Antonella, was freed after more than 5 years imprisoned in Iran. The joy of those hard-won battles for freedom, by people around the world, is resounding. The sky expands, creating more air for my lungs, more space to fly.

Hearing the first words from Tarek Loubani, and John Greyson, two Canadians wrongfully detained in Egypt for 1.5 months, telling the story of their arrest, torture, and abuse, clouds that sky.

“…we were: arrested, searched, caged, questioned, interrogated, videotaped with a ‘Syrian terrorist,’ slapped, beaten, ridiculed, hot-boxed, refused phone calls, stripped, shaved bald, accused of being foreign mercenaries…They screamed ‘Canadian’ as they kicked and hit us. John had a precisely etched bootprint bruise on his back for a week.”

Imagine the horror and heartbreak of hearing that from your brother, son, friend? John’s sister Cecilia responded, in a statement, with “Given John and Tarek’s horrendous experiences from the day of their arrest until now, we have absolutely no faith that they will receive justice at the hands of the Egyptian legal system.”

Friends, colleagues, and supporters of theirs are flooding social media sites with their heartbroken and shocked responses, and the inboxes of Foreign Minister John Baird, and Prime Minister Stephen Harper, with calls for them to step up the pressure for Egyptian authorities to free Tarek and John.

Our shock deepened when rather than answering to their disturbing first account of their experience, and the shock expressed by people around the world, an Egyptian prosecutor ordered them detained for another 45 days, and Egypt’s Foreign Ministry confirmed charges of “participating in an illegal demonstration,” and suggested impending charges of espionage. With not even one phone call to their families to date. What reason do Egyptian authorities have for denying them and their families that basic humanity? Their basic human rights?

Cecilia Greyson spoke to CTV News on behalf of family members, “To have the detainment extended for another 45 days is truly awful for all of us.” I am sure that is an understatement of what their families are experiencing. I imagine that, like we had to, they’re checking their emotions in order to focus their energy on doing everything in their power, every moment of every day, to end their surreal nightmare.

Tarek and John are humanitarians, who have devoted their lives to improving the lives of people around the world. Tarek was “trying to save lives” in response to calls for a doctor at the protest, during their unplanned stay in Cairo. They were only there because they were unable to cross the border into Gaza, where they planned to work on a partnership project between Western University in London, Ontario, and al-Shifa Hospital in Gaza.

Dr. Fahim Ali, a colleague of Tarek, feels compelled to share his experience with Tarek:

“I travelled with Tarek and 15 other medical professionals to Gaza last year to help teach a course in cardiac resuscitation. Tarek has only been practicing medicine for about 6 years. In that time he has helped develop an emergency residency program in Gaza, helped overhaul their emergency system, and taken a variety of other specialists to and from Gaza to develop and help advance medical care for the 1.8 million residents of Gaza who are under siege there. Most of this work is funded by Tarek himself. Tarek is no ordinary person. The fact that he is in a prison on Egypt without reason is not only an injustice it is a travesty.”

Though Tarek knew he faced risks going to a region in conflict, his colleague Dr. Gary Joubert highlights, “It’s always been important for Palestinian-born Loubani to give back to his homeland.”

As someone who takes risks to give back to my homeland, Kenya, I can relate to that. As Tarek’s father, Dr. Mahmoud Loubani asserts, rather than punish them, “If the Egyptian authorities…know about their mission, they should reward them and be proud of them.”

Both Tarek and John are cherished by their families, friends, colleagues, and continue to inspire them while held captive in deplorable conditions, silenced, and denied due process. Every supportive action you take contributes to FREEDOM for Tarek and John, buoys their spirits, and keeps their loved ones going. Just as every action supporters took for Josh, Shane, and Sarah were beacons of hope for them, myself, and all their loved ones. So please go to tarekandjohn.com for a list of actions you can take to reach out, hug them, and pull them home.

Our founder, Farah Mawani, was featured in The Ismaili Canada, the publication of the Ismaili Council for Canada, representing Shia Ismaili Muslims in Canada.

Mark ONE YEAR of FREEDOM for Josh Fattal, Shane Bauer, Sarah Shourd and the global community who fought to FREE them from 2 years and 2 months held hostage in Evin Prison, Iran.

Celebrate by joining the Toronto sister event to one initiated and hosted by Josh in New York City.

Haircuts — Free
Bike Maintenance — Free
Food — Free
You name it — Free
You bring it — Free
We celebrate freedom by sharing what we have to offer. It could be an extra this or an extra that. Bring stuff. Take stuff. No exchange, just gifts. It could be a potted plant, an new T-shirt, old suitcases, a massage, a drawing, or a story in the storytelling booth, a song on your guitar, a book or two, gleaned apples, reiki, .mp3s , quirky refrigerator magnets, sewing severed seams, poems or palm reading, there is no period at the end of this sentence”

Come Celebrate Freedom! It’ll be precisely one year since Shane, Sarah, and I are out of Iranian prison. Free from being hostages and hikers. Let’s walk together! A step closer to the concept every day.”

***TORONTO peeps, PLEASE also bring your response to “FREEDOM is…” in words, quotes, photos, poetry or art, to create a collaborative mixed-media collage.*** 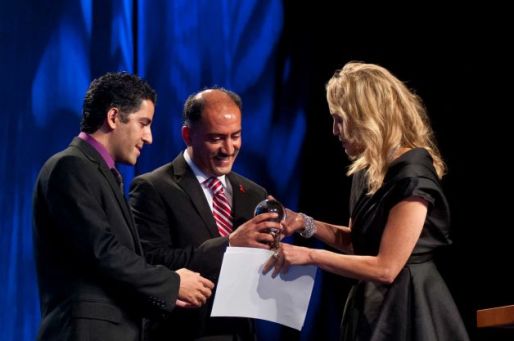 I woke up at dawn today and my first thought was of Drs. Kamiar and Arash Alaei winning the first Elizabeth Taylor Human Rights Award at the International AIDS 2012 conference in Washington, D.C. on July 22. I was beckoned by light streaming through an opening in my blinds, the light of a sunrise filled with hope and the promise of freedom…

TAKE ACTION: Read the full article and sign this petition urging the Iranian regime to return Mr. Shafii’s passport and let him do his job.

DONATE to Farahway Global to enable us to continue this campaign!

“Out of suffering have emerged the strongest souls; the most massive characters are seared with scars”

Since our Free the Hikers social media campaign achieved its primary, seemingly impossible, objective of freeing my dear friends Josh Fattal, Shane Bauer and Sarah Shourd, I have received numerous requests to share our secret. Political prisoner campaigns, human rights organizations, mental health organizations, and even businesses, want to know how we built the global movement that it took to free them…Read more.

Ryerson President Sheldon Levy will be getting a cow from a student who graduates next week.

In the bold journey Teriano Lesancha has taken to get an education, cows were sometimes a sore point between a struggling farmer and his ambitious daughter who wanted the income from selling cows to pay her tuition. They became a point of pride when that debt was repaid, with interest. Interest on four hoofs.

But her outspoken mother, known simply as Mama Teriano, also played a key role. Though she never went past Grade 3, she had a fierce belief in education for her daughter….

University of Toronto doctoral student Farah Mawani worked one year as a tutor at the village school, and her tales of university here planted an idea that Teriano never forgot.

Years later Mawani was surprised when the former student emailed her for advice. She has remained a mentor and friend who helped Teriano get into Ryerson and gave her somewhere to live when her sponsorship fell through…Read More

PREORDER A Sliver of Light: Three Americans Imprisoned in Iran